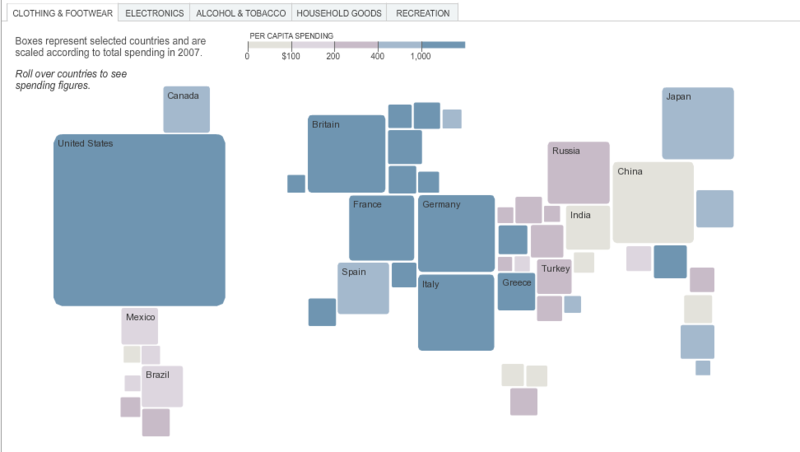 This pseudo-map shows how people spend their discretionary income – the cash that goes to clothing, electronics, recreation, household goods, alcohol – depends a lot on where they live. People in Greece spend almost 13 times more money on clothing as they do on electronics. People living in Japan spend more on recreation than they do on clothing, electronics and household goods combined. Americans spend a lot of money on everything.

via www.nytimes.com
(Click above link to see an interactive map)

Online advertising spending is growing fast. Global spending on advertising will grow by 4.5% in 2011, double the rate of the previous year, according to ZenithOptimedia, an ad agency. 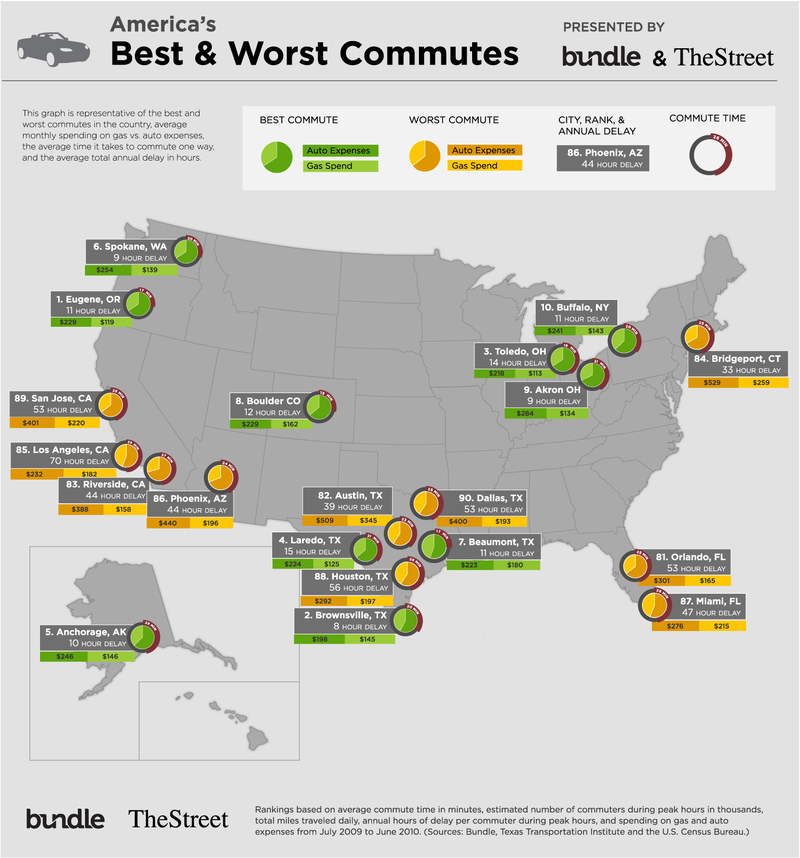 Whether you live in a city, the suburbs or farm country, commuting by car to and from work can be an unavoidable expense. An analysis of commuting costs and trends by Bundle set out to determine not only what people throughout the U.S. spend each year for transportation, but what cities are the worst off in terms of expenses. 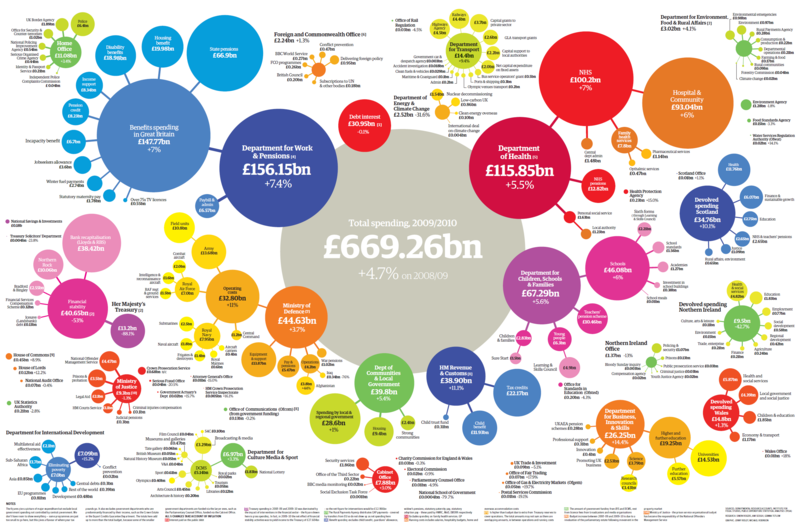 UK Government spending by department is under the microscope. Find out how Whitehall spends your money ahead of the Comprehensive Spending Review 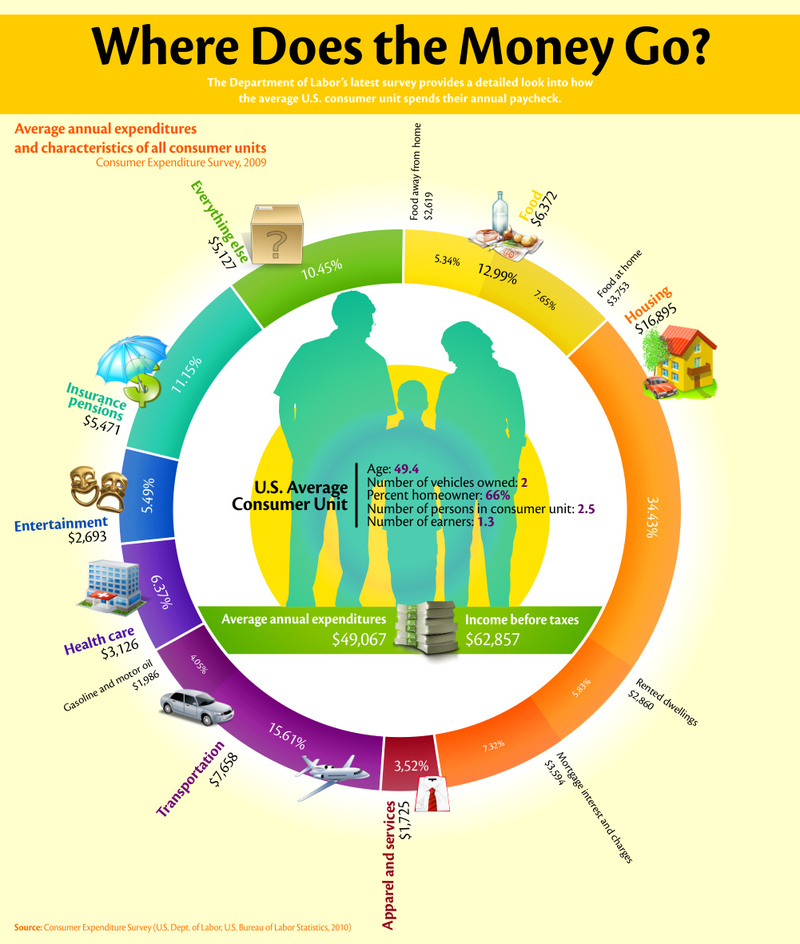 The Department of Labor's latest annual survey provides a detailed look into how the average U.S. consumer unit spent their paycheck in 2009 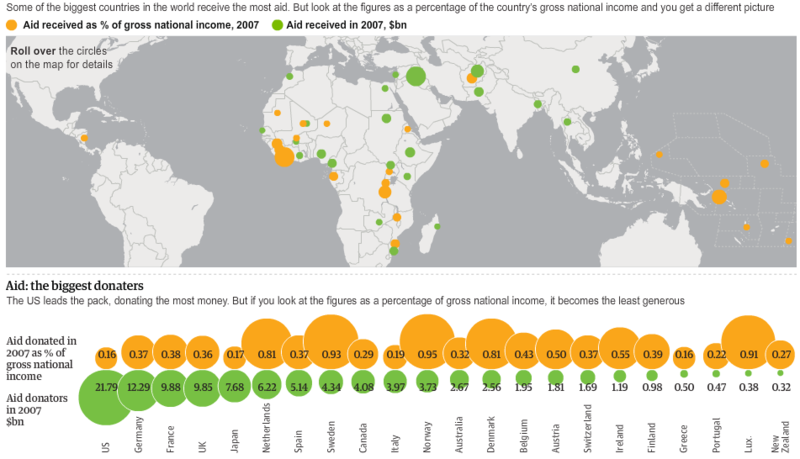 Who are the big aid givers? And which countries receive the most aid? More importantly, what is the link between the two?. Some of the biggest countries in the world receive the most aid. But look at the figures as a percentage of the country's gross national income and you get a different picture.

via www.guardian.co.uk
Ad Age published a look inside Google's core business of search; how much various brand advertisers spend on keywords. By comparison, one of Google's top advertisers AT&T Mobile, spent more than $8 million on AdWords in June, a big month for the company, which was supporting the launch of iPhone 4. Other big June spenders included Apollo Group, the company behind The University of Phoenix, online travel site Expedia, eBay and Amazon, which all spent over $5 million apiece on search. The data obtained by Ad Age includes huge brands such as GM, Walt Disney, Eastman Kodak and BMW, which appear to have spent less than $500,000 in June. Tech rival Apple spent just under $1 million on search during the month, as did chip maker Intel. While big brand advertisers like AT&T, Apollo Group and Amazon will shell out for search keywords, for the most part Google doesn't rely on their business. The top ten advertisers account for less than 5% of Google's total revenue for the month.via adage.com 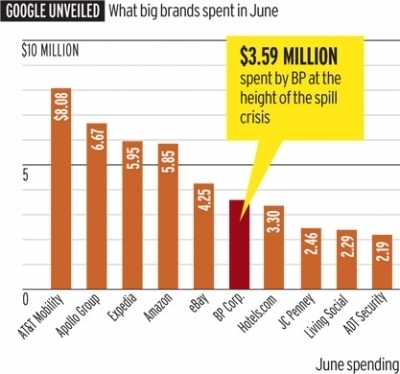 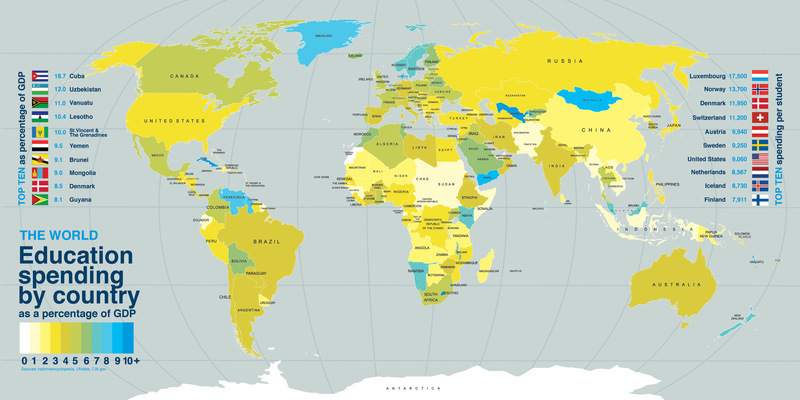 Education is a costly part of any country's expenses. Here's a look at just how much each country values education. 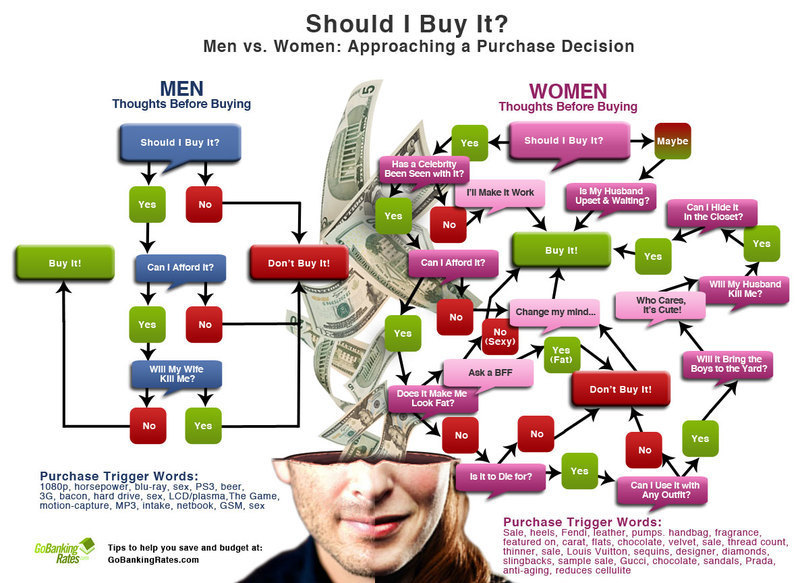 Women: Have you ever analyzed what made you decide to buy that pair of over-priced pumps?
Men: What led to the decision to buy that must-have gadget promising hours of technophilic bliss?

Here's a fun graphic representation of how the thought patterns of men differ from those of women before deciding to make a purchase: via www.gobankingrates.com
Browse the Archive »